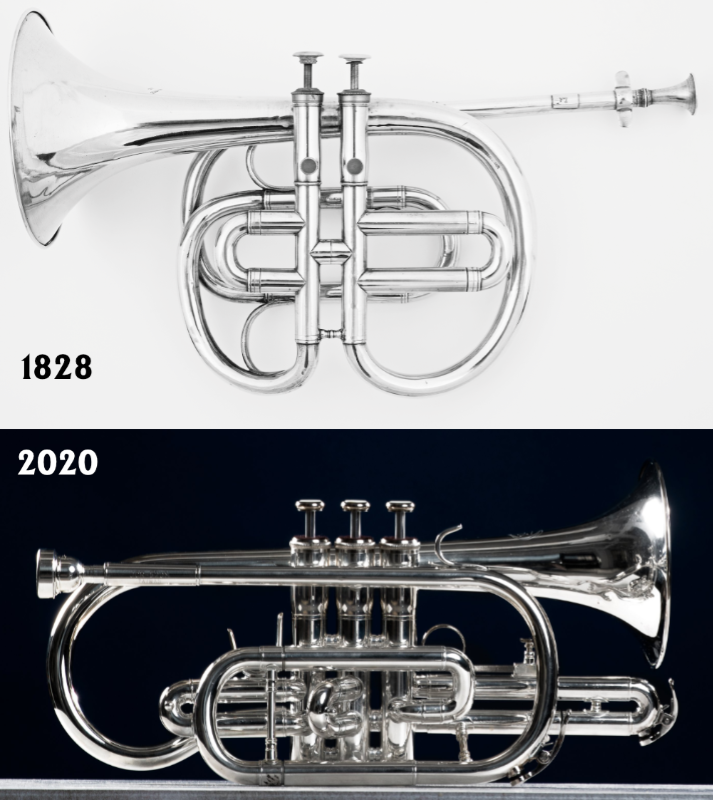 so welcome to the squeaky little one (sorry Cornets!)
The highest pitched instruments in the band and the easiest to transport! And not great for putting ice cream in!
Well, aren’t they just Trumpets? well, kind of but not really! Both instruments are 41/2 feet long and have three valves and that’s where the similarity ends.
Trumpets have cylindrical tubing (so the same width for almost all its length) they are wound looser than cornets so appear bigger and have a bright direct sound think of how a fanfare sounds.
Cornets have conical tubing (so gradually get wider from beginning to end) being tighter wound they appear smaller than trumpets despite being the same length. This gives them a softer mellower sound think Hovis bread advert!
Cornets are predominately only a Brass Band instrument whereas a Trumpet is found pretty much everywhere except in a Brass Band unless it’s a military band where you will quite often have both!
The cornet started its journey in the early 1820’s when it evolved from the continental horn a simple round horn with no valves call a Cornet de poste, one of the first makes of cornets was from a Frenchman Jean Aste known as Halary cornets in 1928 these had two valves later moving to three.
Usually in the key of B flat with a range from E below middle C to the second B flat above it.
Also found in the band is the Soprano Cornet, a little shorter than its B flat cousin and usually only one will be found in the band. Pitched in E flat it sings higher than the B flat cornets and adds the highest voice in the band.